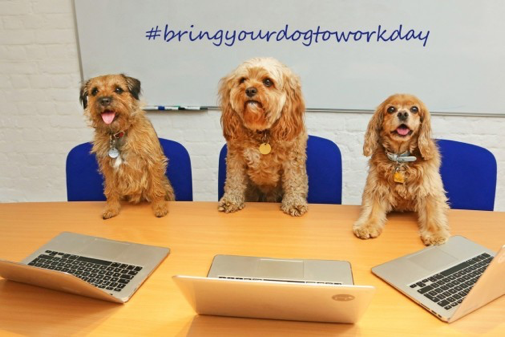 More and more companies understand that the workplace needn’t be sterile or devoid of happiness. Indeed, nap rooms, ping-pong tables and chair massages, are becoming very common in offices all over Australia.

One of the most popular perks that a company can offer is allowing their employees to bring their dogs to work. Studies have shown that when workers bring their pups to the office, overall productivity increases by 28%.

So, when Melbourne’s Detweiler Enterprises, a leading manufacturer of edible adult diapers, decided to offer employees the opportunity to bring their canine comrades into the workplace on Fridays, most employees were thrilled.

“I hate leaving Snookers at home while I’m away,” says Carol Glumpworth, assistant marketing manager at Detweiler, “so I was delighted when our boss told us about “Furry Fridays.”

The excitement in the office was palpable but, unfortunately, short lived. Hidden in the bylaws of the company charter was an arcane clause that “prohibits dogs or any other manner of animal from entering the premises….”

“I was as shocked as anyone when I heard about this,” sighed Simon Detweiler, company CEO. “Taking one’s dog to work apparently runs afoul of company policy. So, if my receptionist Allison brought her dachshund into the office, I would be obliged, by company mandate, to reprimand her with the words, ‘Bad Allison, bad!’ and then shove her nose into the carpeting.”

The news that Furry Fridays would be cancelled disappointed many at Detweiler including those who went out and bought dogs just so they could bring them to work.

But other employees were furious.

Adam Trenchberry, lead diaper taster, was apoplectic. “This is bullshit!” Adam mumbled as he sat alone in the lunchroom. “You can’t take away a perk like this just because some old dudes on the board of directors don’t like dogs. I don’t like my job, but do you see me turning down a pay cheque?”

However not all at Detweiler were disappointed.  Carlos, their national cleaning service supervisor was delighted when he heard the news…“yeah, it’s great maaate, no-one likes cleaning up after the dogs.”

Stunned by the outcry, Detweiler management is planning to introduce a new package of benefits for their employees that will include subsidised gym memberships, a game room and something called “Fortnite Fridays.”